In any case, the larger question is about what level of extinction of memories are we dealing with? The memory that is the technological memory in a harddrive, that sustains our social memory (two different things, already)? The cultural memory of humankind? Or memory as something that sustains any sort of a complex system to «live»? In other words, what if a planetary memory is what we were after all? The dried out sandlands, the dead oceans speak of a memory of a different kind than the archivist is used to.

This memory is also long-term, Szerszynski reminds us: it is a memory of the planet and its outer-planetary existence, and yet of a constant relevance to us as entangled to such systemic qualities that unfold during its lifespan.7 Every thing across the scale of being is embedded in a dynamic, rhythmic existence.

The archive works against itself – this is the «mal d’archive» (Derrida 1995, 14). Whether it is the very strata of the rock, or an archive created by humans in order to record Earth’s memories and what it knows, the archive’s very form of resistance to forgetting makes a more final forgetting possible – the hiding or destruction of the archive. The closed archive of the solid body of the Earth is now being opened but at the same time ransacked

Everything we are will be forgotten in the fullness of Geologic Time.

During one year María Molina Peiró carried a wearable camera taking a photo every 30 seconds. The enormous collection of photos collected by the camera are shown in an interactive archive that instead of “remembering” proposes a creative forgetting of the vast photo archive.

One Year Life Strata proposes a visual metaphor of forgetting by transforming the digital memory into strata and burying it into deep time. Therefore, the interest doesn’t lie in the individual images but in the overview and the data that can be derived from them (highlighting the main role of images on the Internet).

In the archive the images are used as data that can be explored and edited. Finally, they are transformed into a 3d printed Time Capsule.

In a society obsessed with data and recollection, One Year Life Strata wants to open a reflection about the growing fear of forgetting in the Digital Age, the indiscriminate use of data and the importance of rethinking our ability to forget in our society.

On January 31st of last year, at exactly 23:45 I started wearing a small device called Narrative Clip[1], with the purpose of wearing it throughout all of 2015.

This camera, which announces itself on its website as “Memories like you´ve never shared them before”, consists of a “digital memory” that offers the possibility of storing our daily lives for a reasonable price and little effort. Narrative clip takes photos in an arbitrary way every thirty seconds while you wear it as a necklace or breast pin. There are currently other similar devices such as “Mecam” of the better know Google Glasses in the market.

In my experiment I was mostly interested in seeing if my behaviour and that of those around me would be somehow affected by the use of this camera, I was interested in questions about privacy,  and how we have become a kind of CCTV camera registering everything that happens around us and how this reality is becoming something normal without our society looking at it very critically.

But after 3 months wearing a Narrative Clip on a daily basis,  I also became interested in how the Narrative Clip was a clear example of the impulsive recollection in our society and a shift we are going through: forgetting has become the exception and remembering the default.

In April 2015, almost on its own, an idea began taking form: what I had to do with this experiment was actually to create an awareness of these ideas, to develop a creative proposal of “digital forgetting”, a proposal that intends to open a reflection on the indiscriminate use of “digital memory” and the value of forgetting.

Then my experiment was transformed in to the project “One Year Life Strata”.

The use of Narrative Clip during one year to «digitalize» my daily life.

Create a site where you can see all my photos of 2015 piled together in a three-dimensional montage. The combination of images will look as if a group of geologists with a giant drill had extracted the core of my 2015, revealing its different strata.

This will permit a vision of the aggregate of my images in 2015 but not the individual images. The project is therefore not interested in the images themselves but in the data that can be drawn from them, simulating Google’s modus operandi and proposing a creative of forgetting of my 2015.

In this site there will be a 3d interface where we can move freely to the different “stratigraphy sections” of each month of the year. We will also have different indicators that will change the form of the “section” depending on the required data.

I started to work with the dutch designer and developer Frederic Brodbeck recently, so the video you can see bellow is just the first trial and it was focus on visualizing the virtual strata. So here are just some easy tools in order to play with the stratigraphy section, this is not what is going to be on the real website. And as you can see in this trial you are able to see the images, something that will not be possible in the real site. But I did it this way on purpose in order to show that I´m working with the real material, with the photos of the experiment.

In this step the objective is to put into material form the virtual strata. So the tri-dimensional forms produced by the website, the core of my 2015, will be printed in 3d.

The external disk (that will contain all of the photos taken by Narrative Clip during my 2015) will be stored inside of the sculptures. The sculptures will then become a time-capsule that can only be opened after 60 years. This will mean that you have to break the sculpture but also deal with the possible obsolesons of the digital format in which all the photos are stored and the digital forgetting that could imply. The sculpture is then born with the spirit of a digital archeological remain or fossil. 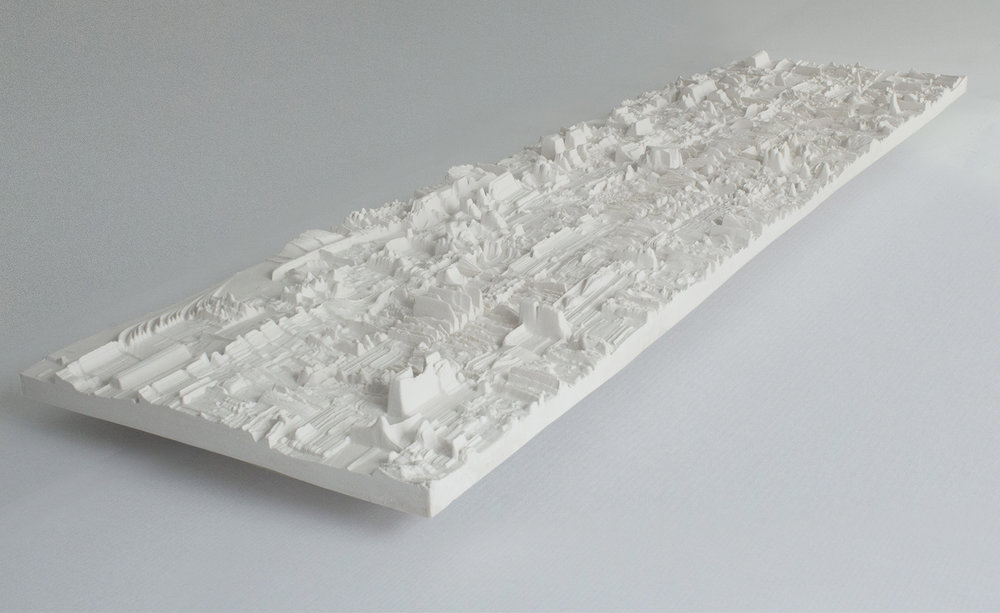 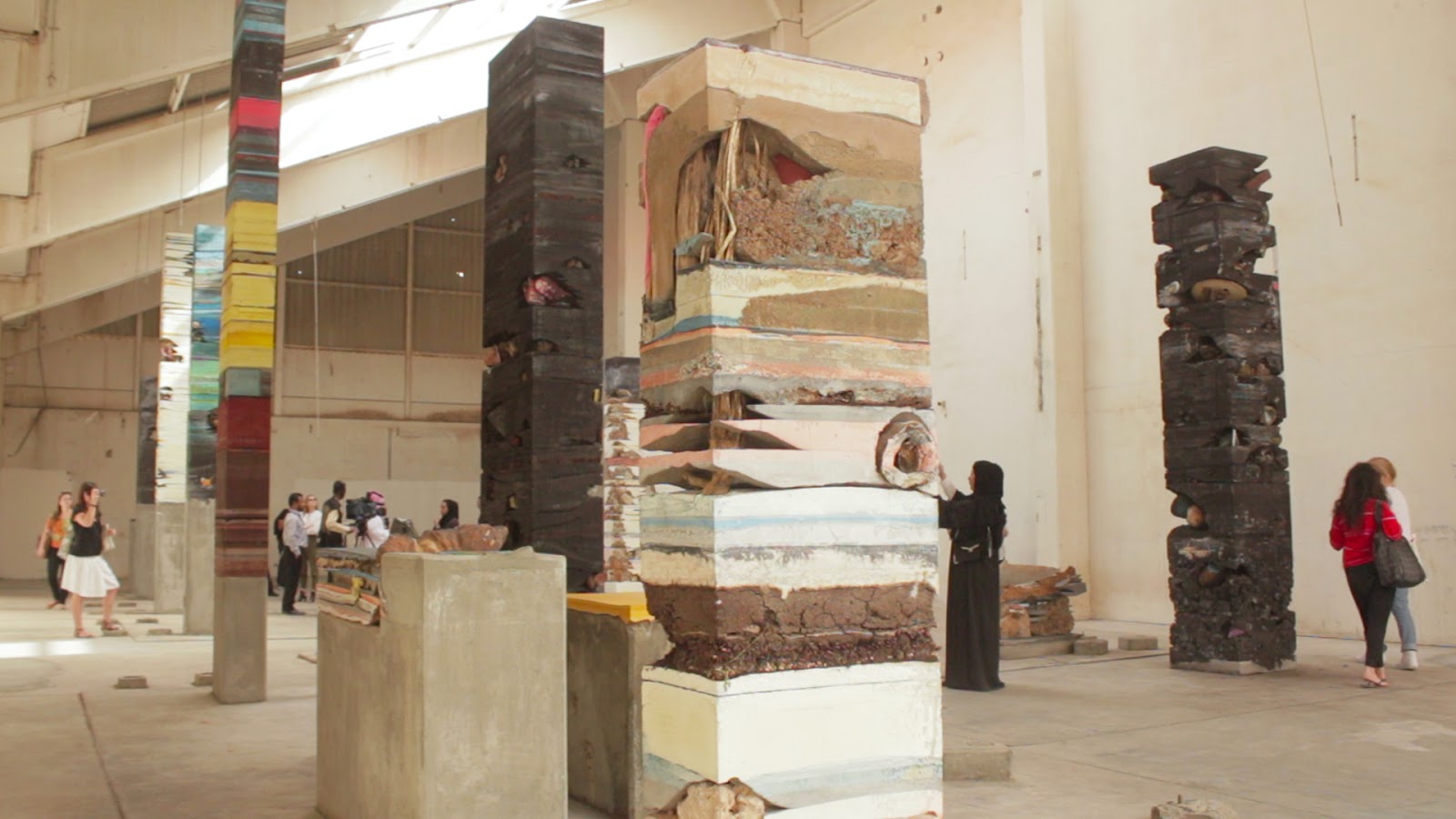 On the website there will be a section where I document the experiment itself, and the different steps within the project.

In September I decide to make a little experiment in order to materialize the project One Year Life Strata. For the experiment I just use the photos from one day, within the vast archive I picked the day my daughter was born, for obvious reasons.

In order to depict the strata I went through all the photos of that day, drawing with pen colors  just the bottom and the left side of each photo, as if they were a layer from the strata, as two lines. Some red, some grey, some black and so on.

Almost 1000 photos, so you can imagine how much time it took me to make the drawing. I used this time, about 40 hours, as a kind of Zen Ritual, in order to put my thoughts again into my research and project, after one year off from the master.

In the drawing I also trace the GPS data (from my home to the hospital) and at the end I also inserted a card memory with all the photos of the that day in one of the black holes I made in the drawing.

And after so many hours transforming human horizontal time into vertical geological time, I started to wonder about the earth´s memory , And I started to wonder, for example, about  How does the earth forgets?, or How will the earth remember us?…So I ended my experiment listening to recordings like this:

5. Integrate my Research publication in the online project

The site will be also the container of my research publication in order to give the online project a much deeper layer and context but also to give to the online research publication a more playful and interactive structure, where the container is the content itself. So this website will be also a kind of interactive “research-essay” about the “Fear of forgetting and being forgotten in the digital age”.

I´m still thinking about how to integrate it but for example I´ve been thinking about using each month of the year in order to address one of the points of my research.

You can see here a trial I have done in this link: