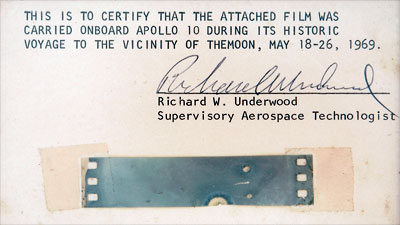 The agency named Richard Underwood its first chief of photography. He was a visionary who advocated for experimenting with cameras during the Mercury and Gemini programs. Later, he taught Apollo astronauts how to frame shots, set exposures, and calculate focus, and encouraged them to tote their Hasselblads on personal trips to hone their skills. “Your key to immortality,» he told them, «is in the quality of your photographs and nothing else.»

In doing so, they made sure everyone, everywhere, could appreciate the majesty of space, and their place in it.

Richard «Dick» Underwood was chief engineer on the production of the first topographic maps of the moon. He was the first person to view every photograph from the Gemini, Apollo, Skylab, Apollo-Soyuz and the first 23 space shuttle missions. He also provided technical training to every astronaut who went into space in the twentieth century.

UNDERWOOD: A lot of people felt that it wasn’t of any great value. They were looking at a different drummer, listening to a different one. They had other things that they were thinking about, that here we’re using cameras you can buy in a store that have been modified, and we’re not carrying super systems like flew on U-2s or other things, and we really didn’t want to, because we didn’t want to get into the security business. Everything NASA did was in the public domain, and we didn’t want to whack into that particular area. We wanted pictures that recorded it the way the astronauts saw it, and this camera with this lens is exactly the way the human eye works.

he light conditions generally from those altitudes. You’re above the clouds, so you’re not going to get changes from clouds. We knew where the sun position was. We knew the dynamics of the film, the lens, the camera, and knew that with rather common settings, where they didn’t have to play any games with cameras, we could go to general settings and they could get a great array of photographs.